Phillip Palmejar began his martial arts journey prior to his teenage years after moving to Calaveras County from the California Bay Area. There he obtained the rank of 1st Dan Black Belt in the art of Tae Kwon Do in an attempt to counter act what he saw as an apparent lack of size and strength and to gain confidence.

The next step in his martial arts career began in the dynamic art of Jeet Kune Do. Originally gravitating to the art through the influence of Bruce Lee and his philosophies, Phillip has continued to study and train in Jeet Kune Do for over 15 years eventually obtaining his instructor certification under the tutelage of Sifu Roy Harris.

Through his familial influence and training in JKD, Sensei Palmejar was exposed to the world of Filipino Martial Arts and to many of the unique styles of combat that exist within the scope of FMA. Starting initially with the Inosanto blend of Kali, which is used as a foundation for many of the techniques and movements within JKD, Sensei Palmejar has expanded his FMA training to include Jendo / Arnis, Kalis Ilustrisimo and Pulahan Derobio Eskrima. As an FMA teacher and practitioner, Phillip has successfully won several expert division and world level tournaments, was inducted into the Universal Martial Arts Hall of Fame (Houston, TX 2015) and has visited and trained in the Philippines under several masters in which he received his Third Degree Black Belt in Jendo/Arnis under Grandmaster Jonathan Makiling Abaya.

One day while training at a multi-use martial arts facility, Phillip caught a glimpse of a nearby BJJ class during a rolling session. He was invited on to the mat that day and has continued his grappling career ever since. Phillip has excelled in his more than 15 years on the mat obtaining not only his Black Belt in Brazilian Jiu Jitsu, but also his level 1 and level 2 No-Gi grappling instructor certification under Sifu Roy Harris who is one of the original 12 non-Brazilian Black Belts in the world (BJJ dirty dozen).

Phillip is an ever evolving martial artist in both learning and instruction, recently focusing on and obtaining his 2nd degree Black Belt in Greek Pankration Athlima under 8th Degree Black Belt Hanshi Roberto Serrano, Jr. Through Pankration, Phillip has been able to compete for the US National Team in 2007, 2010, 2011 and 2012 amassing a total of 7 World medals. He is also the 2012 California State Champion (145lbs) and National Champion (65KG) and was an official USA National Team Coach for the Palaismata and Polydama events in 2011 and 2012. His Pankration Black Belt is recognized through WPAF (World Pangration Athlima Federation), WAMAI (World Amateur Martial Arts International), FILA (Federation Internationale des Luttes Associates, aka International Federation of Associated Wrestling Styles), USFL (United States Fight League) and the USAFPA (United States of America, Federation of Pankration Athlima).

In his scholastic endeavors, Sensei Palmejar holds an Associate’s Degree from Southwestern College in Chula Vista, a Bachelor’s Degree in Comparative Government from UCSD and is currently enrolled at the California Institute for Human Science in Encinitas in a Master’s program for Comparative Religion. He also volunteers at the Metropolitan Correctional Center (MCC) Federal Prison in downtown, San Diego, teaching Buddhist studies every Monday afternoon.

Lineage in Jeet Kune Do 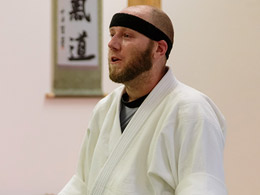 Like most 80’s children, Mark’s interest in the martial arts began with The Karate Kid. Soon after, he was enrolled in a Tae Kwon Do class at the local fire station in his home state of New Jersey. In 1988, at the age of 6, he and his family moved to San Diego. He took several other martial arts classes commonly taken by other children, including Karate at the Kearny Mesa Recreation Center and later, two years of Tang Soo Do with his best friend from cub scouts, taught by Master Will Deak and Assistant Sean Andrews.

In 2003, at the age of 21, Mark started studying Aikido under Martin Katz Sensei at Ryushinkan Dojo at the Stanley Park Recreation Center, where Sensei Katz has taught Aikido for over 40 years. Mark currently holds a 2nd degree black belt, earned in 2014 from the Aikido Association of America. He has taught weapons and children’s classes since earning his blue belt in 2007 and has attended seminars all over the world – most notably with Frank Doran Shihan and Hiroshi Ikeda Shihan. After meeting Professor Roy Dean at the Aikido Bridge Seminar, Mark started studying Brazilian Jiu Jitsu under Professor Dean at Jiai Aikido. This is where he met his current instructor, Sensei Phillip Palmejar, who took over the class after Professor Dean received his black belt and moved to Bend, Oregon. In 2009, Mark earned his blue belt, testing under Professor Roy Harris at a P5 Seminar. Mark has competed several times in the local Grappling X tournaments and in 2009 at the IBJJF Nationals. Mark has been one of the original students since the days of P5’s birth and was awarded his instructor bars in 2017.

In 2011, P5 Academy began teaching Filipino Martial Arts classes, much to Mark’s delight. Mark has been studying FMA with Sensei Palmejar and has become proficient in several armed and empty handed styles of Kali and Eskrima. Mark has competed in several events, such as The Way of The Stick and Blade, as well as San Diego’s Underground Lightsaber Fighter events held at Balboa Park. Fun fact: Mark is related to New Jersey boxing legend Mickey “the Toy Bulldog” Walker on his father’s side. 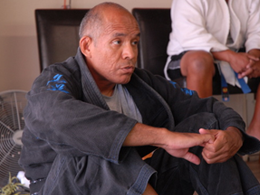 Since 1981, Mr. Roy Harris have been involved in thousands of hours of hands-on martial arts, self-defense, military combatives, defensive tactics and functional fitness training. In those 30+ years, he has obtained several black belt and instructor certifications.

To date, he has taught 528 seminars in 25 countries, written more than 300 articles, answered thousands of questions on various martial arts forums, written a book, produced several apps and have produced a few hundred instructional videos for his students, instructors, and clients on his various websites.

He owned and operated a martial arts academy in San Diego, CA for seventeen (17) years. After closing his martial arts academy, he began pursuing police departments and military units to consult with. To date, he has contracted with two Southern California law enforcement agencies and is in negotiations with a couple of others. He is also working on contracts with a couple of military units.

Several of his students have fought and won numerous times in the UFC, Bellator, King of the Cage, Rumble in the Cage and various other MMA events. Some have earned championship belts.

He is a U.S. Air Force Reserve veteran. Over the past three decades, he’s held a variety of jobs – everything from associate pastor to truck driver, busboy to police officer, auto body specialist to Kettlebell instructor, paramedic to private investigator, and basketball instructor to bodyguard. He’s gained quite a bit of experience in many areas of life and has been fortunate to have met and made friends with people from all walks of life: Mothers who were athletes to Senators, musicians to foreign dignitaries, Navy Seals to leading scientific researchers, and homeless individuals to vice chancellors.

He has mentored, and continues to mentor, a handful of men and women in San Diego, Orange and LA Counties. He enjoys sharing his life with them, as well as watching them grow, mature and blossom!

Since 1981, Mr. Harris has studied and been involved in thousands of hours of hands-on training in twenty-seven (27) different styles of martial art. Here they are:

Since 1981, Mr. Harris also obtained the following ranks and certifications:

Groups I Have Trained

As of August 2016, I will have taught five hundred and thirty (530) seminars in twenty-five (25) countries around the world! My knowledge of, and expertise in, the martial sciences have been utilized by various civilian organizations as well. Here is a brief list of companies I’ve worked with:

Here is a short list of individuals who have sought out private / personalized instruction from me over the years:

I have appeared on a syndicated television show entitled “Don’t Be A Target: A Television Guide to Crime Prevention”. I’ve also appeared on a local San Diego based news station because of my expertise in Jeet Kune Do. I was featured in Black Belt Magazine, a few Southern California newspapers, as well as several international martial arts magazines. Back in the mid-1990′s, I was interviewed by a San Diego based radio station and even answered questions as callers called into the station to learn about martial arts and self-defense. Because I’ve taught 100+ self-defense workshops to the general public, free of charge, I was nominated as “Angel of the Week”.

I was inducted into the Masters’ Hall of Fame in August of 2007.

I am (or was) a proud member of the following associations / organizations:

Here is a short list of instructors who have heavily influenced my martial arts teaching and training:
Call Now Button